When someone calls you “Kiongozi” it is a sign of respect and deference to your leadership. He is the first cousin of ‘Boss’ and the illegitimate brother of ‘Mkubwa’. Don’t be surprised if they ask you to run for office.

But when a Kenyan calls you ‘Kiongozi’, that’s not the compliment you mean. The subtext is that they have determined that your wallet is thick and now they are going to ask you to save your title by throwing everyone drinks.

Likewise, Kenyans don’t give a guess as to when they will be ready, where they are in relation to Mombasa Road, or how long it will take them to get to where you’ve been waiting for them for an hour. They will simply say “Ndio huyu mimi nacome”.

It is up to you, Kenyan compatriot who also speaks the language, to understand that the person you are expecting has not left your home. Your third phone call made them speed up just enough to jump in the shower, but it will be a while before you actually see them.

Over the past few weeks, a journal of Kenyan expressions and manners has surfaced on social media, with entries like these. It’s a mind-boggling collection of seemingly innocent things Kenyans say, which means something completely different.

Apparently, Kenyans often don’t stick to the denotative meaning of the words they use. However, we have a common culture that does the translation for us, and the results are often hilarious.

Earlier this year, H_art the Band released My Jaber, an earworm celebrating the beautiful Kenyan.

It was a phrase that Kenyans immediately understood. “Jaber” translates to “beautiful girl” in Dholuo; it belongs to a range of pet names that have been in rotation for casanovas looking to find their way into lonely hearts.

The other culprits are A gal bebi, A gal toto and Jasianda. If a woman is called “Babyghurl”, according to the Kenyan dictionary, then she is claiming her right to be treated like a princess and will not settle for less.

Some messages are informative. If someone visits your humble one-bedroom abode and asks you how much rent you’re paying, it’s a subtle way to gauge the depth of your pockets. It is a calculated question, with which they can determine how much you are earning, and therefore determine that you are living beyond your means.

A Kenyan woman will rarely tell you that you are attractive. She could however mention that “Unakaa kua na madem wengi”. They won’t tell you that you’re okay either. They will just protest “Sasa hatutapumua? ”

“Ata sikai sana” is the code for “I’m just starting to feel comfortable, so you might as well start making dinner”.

You don’t end a call with a goodbye, you say “Wee tutaongea”.

And when going for a job interview, the most important tool to have in your back pocket isn’t a strategically edited CV; it’s not even a response to “Where do you see yourself in five years?” ”

No, the best weapon in your arsenal is the “Mwambie ni mimi nimekutuma” statement. 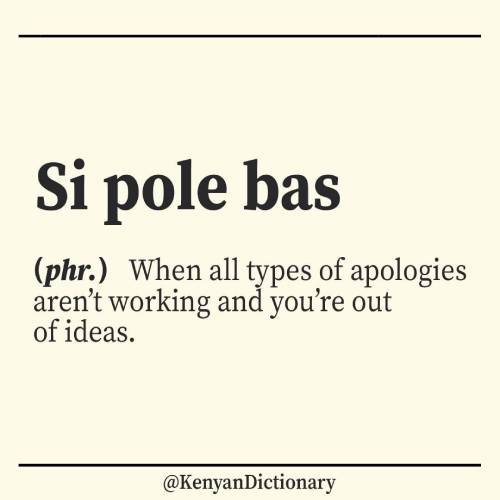 Many more starters are just fun glimpses of the Kenyan way of doing things.

Like “Ask a Friend”, which is a silent plea not to be judged, “DM for the prices”, an unnecessary trip to private messages where the prices are rigged, and “If pole low”, a stubborn final, to take. -or-let them apologize, this is the best you can get.

He’s the best and the worst Kenyans; casual and comical, just like the people he represents.

The minds behind the craze

The idea was originally conceived by a group of friends, Kelvin Kamau, Winnie Mashirima and Edwin Ngari, who came together to help break down unique Kenyan lingo.

“We had a discussion about how Kenyans use phrases that only Kenyans understand and also how some of those words have deeper meaning to them,” says Kelvin, one of the creators.

“So we decided to create the Kenyan dictionary to help people understand the meaning of these words and expressions. ”

“It’s part of our vocabulary, things that we say daily, but now people tell us that every time they use a sentence that we published, their friends say: ‘niliona hiyo Kenyan Dictionary so najua unamaanisha neither nor “. ”

The popularity of the posts came as a surprise even to them: “We figured it would only resonate with a few people, only to find out we’re all going through the same things. ”

It also meant a big increase in the number of followers.

“It touched us greatly as we now have a voice in the community and people come to us for sentence definitions. Plus, something we started as a hobby is now turning into a brand. ”

Perhaps the dictionary’s greatest appeal is the shared nature of the experiences.

“It’s our way of speaking,” says Brian Mwendwa, a JKUAT student who has shared the posts extensively.

“People from different parts of the country all relate. I find myself using the expressions even without thinking about it. My family and friends had a great time reading the sentences, so it was really fun, ”he says.

Mwendwa, an aspiring social marketer, regularly shares content on his social media, especially on Twitter. It was instructive for him.

“I had the opportunity to interact with a lot of people, I developed new ideas on how to manage my page, and I am grateful for it.”

Peter Githinji, associate professor at Kenyatta University specializing in sociolinguistics and dialectology, believes that such a catalog of our language represents our creativity and innovation.

“Kenyans are very creative,” he says, “and we see that a lot in our use of the language. If you come up with a corrupted version of any language, even the native language, that’s fun, and that’s part of our creativity.

“Our use of language reflects a rejection of these codified versions of language that are forced upon us.

“We like something that gives us room to create, room to maneuver. You can do what you want with it, express yourself however you want, ”he says.

He also sees attempts to define our language as our way of trying to connect with each other.

“Remember, a determining factor for urban languages ​​like Sheng ‘is that they have a certain secrecy, a certain exclusivity.

“Some groups are excluded by default. So now we see this renegotiation where people who engage in languages ​​want to expand awareness, involve more people. ”

“The stigma that was once there is removed, and the language is then acceptable to a majority. We also see it with things like memes. And that is not limited to Kenya either.

“If you look at America, for example, there’s the Urban Dictionary, which also breaks down language and culture. Through things like this, we can engage in a global discourse.

“Our use reflects an emerging culture, and part of it brings everyone into the fold. It is also a reflection of the vitality of our culture.

The leaders of the rebellion of Malabar Variamkunnath Kunhamed Haji, Ali Musaliar and 387 other “martyrs of Moplah” will be removed from the Dictionary of the Martyrs of the Freedom Struggle of India. A three-member panel, which reviewed the entries in the fifth volume of the dictionary, published by the Indian Council for Historical Research […]

Nyama choma, a popular Kenyan term used to refer to grilled meat, has been added to the Oxford Advanced Learners Dictionary (OALD). According to the dictionary, nyama choma, described as meat cooked over a fire, can now be used in formal English contexts. A Nation report on Sunday August 1 indicates that the word is […]